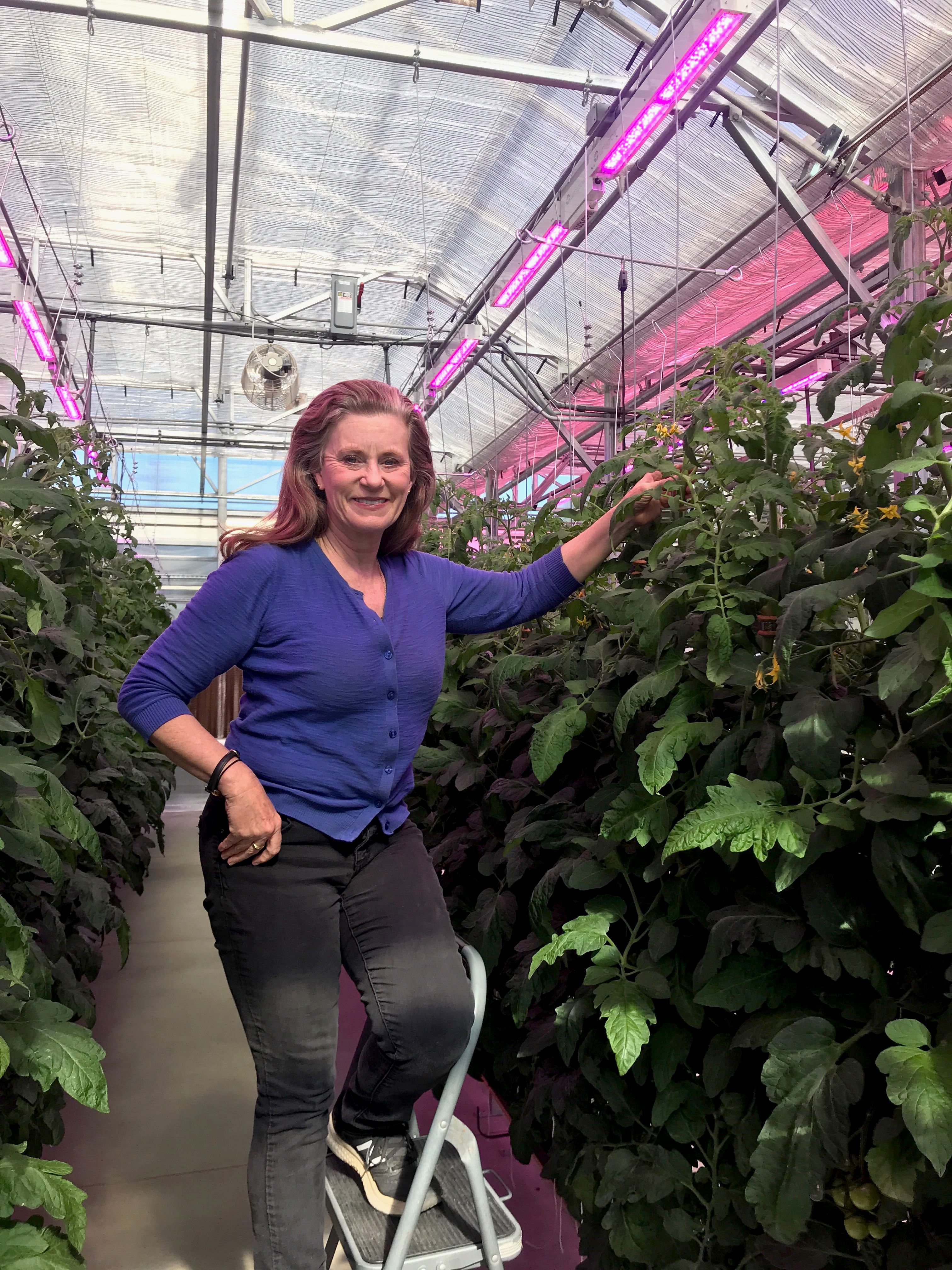 LumiGrow is a lighting engineering company based in Emeryville, California that makes smart LED grow lights for controlled environment agriculture (CEA). We recently met with Melanie Yelton, VP of Research at LumiGrow to learn about how she is using her expertise in photobiology to help LumiGrow’s customers maximize crop performance and profits.

Can you tell us about your background?

I did my Ph.D. in molecular biology at UC Davis, with a focus on plant pathogens. Before joining LumiGrow, I was a lecturer and research scientist at Stanford University, where I completed a postdoctoral fellowship looking at microbial signaling between Rhizobium bacteria and alfalfa.

When and how did you join LumiGrow?

I had known one of the founders for some time and had an interest in LumiGrow for a long time before coming on board. When LumiGrow was founded in 2007, LumiGrow had no one on staff with plant expertise that could look at how to optimize LEDs for particular crop applications. After the company started to mature, one of the founders approached me and asked me to come on as a consultant for 5 to 10 hours per week. This was the perfect opportunity to dig deeper and learn about the power of the spectrum to influence plant growth. I got super excited about the potential of LEDs. I consulted for LumiGrow for about 3 years, after which I was brought on full time in 2015.

What are LumiGrow’s core products and how does your research group support them?

We have two LED products – TopLight for greenhouse and BarLight for multi-tier applications. Both can be automated using our smartPAR wireless control system, which allows you to remotely adjust and monitor light intensity, spectrum, and photoperiod.

SmartPAR was a core concept from the beginning that the company’s founders felt should be fundamental to LumiGrow. They were ahead of the industry in that respect.  There was some knowledge of how varying the red and blue spectrum impacted plant growth, so the founders knew it would be important to be able to control spectrum. The original version of our lights actually had dials to control the intensity of each wavelength. Now everything is wirelessly controlled by our software platform.

Is there any other lighting company working this closely with growers?

We really are the only company doing this.  LumiGrow’s approach is to fully understand and work as partners with our customers. Coming from a university background, that was important to me. A lot of companies are selling to consumers as basically a test market to validate their product… They’re not doing the experiments we are to maximize usage.

Do all of your customers request the collaborative research you provide – is it built into your business model?

Most of our customers want a customized system and the assistance of our research group to optimize wavelength and intensity, especially those customers that are moving into new crops. We currently consult on our customers’ projects for those that need a little help getting started.

Can you tell us about one of your recent customers who has benefitted from your research group?

Monte Fiore Farms in Colorado, a cannabis grower, recently moved from HPS to our LEDs. One of their goals was to make greenhouse-grown cannabis more acceptable by proving that it was better than field-grown. We worked with them to design a system with a self-adjusting, targeted spectrum.

The result was a superior craft product. Of 14 strains grown at Monte Fiore with our system, 8 tested above 30% total cannabinoids. Productivity also increased from 45 grams of flower per square foot to 60 grams per square foot.

Did you do the research with Monte Fiore on what settings maximize cannabinoid levels?

I was asked that very question at a conference earlier this year – how to dial in specific lighting and fine tune for production of CBD.

Our work with universities has shown generally that high blue light stresses plants. This causes them to make secondary compounds to protect itself even if the exposure doesn’t include UV (similar to when sunlight induces melanin production in human skin). The result is darker, thicker foliage and more compact growth, as well as production of compounds like anthocyanins, which give a reddish color.

When I came on board at LumiGrow, there had only been a few experiments done in growth chambers on a small number of species. With our adjustable LED fixtures’ ability to alter light output, now we can change light inputs in the greenhouse from one day to another, including some pretty aggressive changes.

So with cannabis customers, like Monte Fiore, we’ve asked if they can designate a portion of their crop for minor experiments. In cannabis, already there was already anecdotal evidence that LEDs could induce higher cannabinoid levels, but we needed to prove it.  Just how much blue is necessary to boost cannabinoid levels? So, some of our customers have devoted a portion of what they grow to trying for the last 72 hours with higher blue light levels to maximize cannabinoids.

Can you give us an example of a food crop you’ve worked with?

We have two projects in tomato with the University of Guelph in collaboration with two large indoor growing facilities in Ontario. The goal is to determine how to maximize propagation and growth intensity. We are looking at which varieties need more light than others, similar to the differences between different tomato varieties grown indoors.

Your site mentions how LEDs can improve plant propagation, which is a basic function in many CEA systems. Do you foresee LumiGrow having a greater role here?

Our group has shown that changing the spectrum can improve plug quality and reduce time to rooting.

The industry is rapidly moving from high pressure sodium (HPS) lights to LEDs. Do you expect the CEA industry to make a complete transition to LEDs in the near future?

Last year I attended a talk by A.J. Booth of Rutgers University, the father of LED applications in CEA, and who once said that there would be no more HPS by 2028.  At today’s conference, I was on a panel and I did a survey of the audience to see who was using HPS and only one person raised his hand. So, yes, the transition to LEDs has been rapid.  It’s now inevitable because the cost of LEDs have come down so much.

Another big issue is spectral degradation of HPS versus LED. Every HPS manufacturer will recommend replacement every 10,000 hours. This translates into specific crop loss and real dollar losses as HPS lights degrade.  LED put out the same amount of light and don’t degrade as quickly. Growers know the numbers – they’re well-established.

The only factor slowing adoption is that some researchers have used HPS in their greenhouses for a long time and are hesitant to move to LED. I saw this at UC Davis, where LumiGrow played a role in the transition to LEDs in campus greenhouses. But most of the younger professors there want to work with LEDs because they know it’s the future.

What advice do you have for academics or others who are interested in joining or founding a startup?

Assembling a good team and making sure the objective for each person is clear is critical for synergy. Money will be limited, so you need to spend time prioritizing how to spend the money you do have. Be very careful about how you spend your resources.  Don’t neglect marketing, which is extraordinarily important. If nobody knows about your product, how can anyone care about your research? Finally, you need a strong leader who sees value of each segment of the company.

What do you see on the horizon for your research program at LumiGrow over the next few years?

LEDs and software are the heart of our company.  I would like to see the knowledge we are generating disseminated faster so people don’t make so many common growing mistakes. I want to share our knowledge so people can start up running instead of stumbling through the first few growing cycles.

LumiGrow has experienced significant synergies and growth by combining the expertise of its lighting engineers with the expertise of its photobiology team. We look forward to further LumiGrow research into maximizing plant growth and quality with specific light ‘recipes’, as well as watching their customer base continue to grow!

New Innovator Spotlights will appear soon, featuring the innovators and change makers in the sustainable food and ag innovation space. If you know of someone we should be covering, please email us at hello@vine.press4.pagedesign.us

About the author: Leanna Sweha is an attorney with an agtech background and is Program Director for AgStart. She is passionate about promoting new sustainable agriculture and food companies.