Innovator Spotlight: Athena Intelligence – An Advocate for the Acre

The VINE (The Verde Innovation Network for Entrepreneurship) mission is to help sustainable  food and agriculture innovators access the connections and resources they need to build, launch and grow their innovations. As a part of our efforts we are launching a series called Innovator Spotlight to highlight the innovators and change makers in the space.

For our first post in the series, we were excited to speak with David Sypnieski, Co-Founder and CEO of Athena Intelligence, at the 2018 Impact Global Venture Summit in Sacramento.

Athena’s data processing and visualization platform provides predictive insight and decision support to food companies and their contract growers in a way that leverages, not replaces, growers’ experience and wisdom.

Sypnieski likes to call Athena an “advocate for the acre.”

Sypnieski, a Lodi native, spent his early career in ecommerce startups, where he had his first agriculture clients. He began to question whether the IT he was marketing was delivering value or if it was seen as a burden. “If technology doesn’t provide a benefit on the ground, you can’t evolve,” he said.

So, Sypnieski took on the monumental task of centralizing, integrating and normalizing public data important to agriculture to make it easier to use. 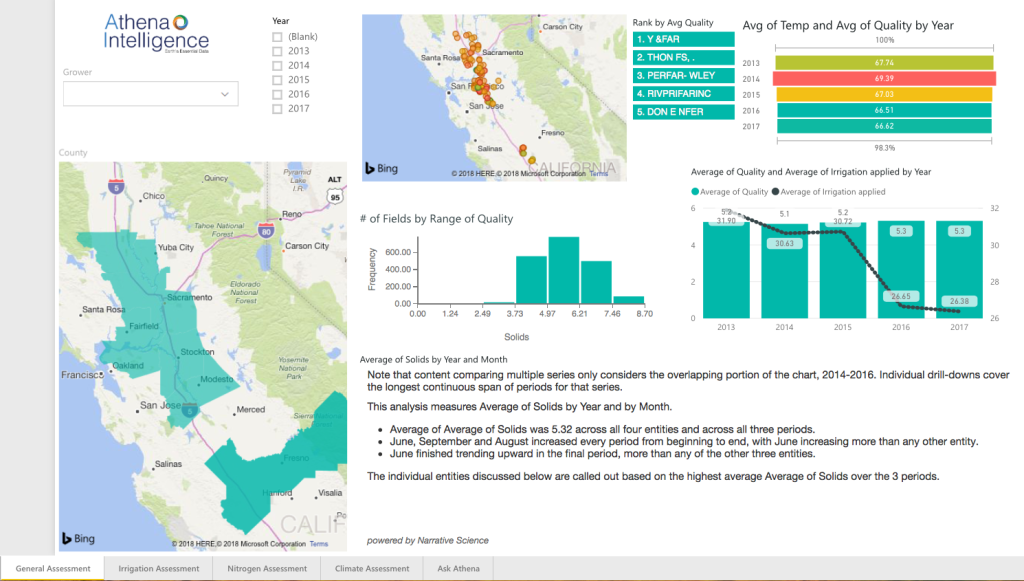 Campbell Soup Company, through a prior relationship, became interested in Athena and sponsored a pilot project to fund production of the initial database platform and analytics.

The goal of the pilot was to use public and private data to understand what management practices would maximize solids in processing tomatoes, which is a quality of high value to Campbell’s.

As a result, Campbell’s has improved its supply chain risk management. The data also provides a basis for sustainability reporting and market transparency that investors and consumers increasingly demand from the food industry.

Athena’s anonymized grower reports give growers valuable base data and show each grower where he/she stands relative to Campbell’s quality and sustainability goals.

Growers that meet Campbell’s quality and sustainability goals can leverage this in their relationship with Campbell’s. Growers not meeting the goals can elect to change management practices to increase their value to Campbell, leading to better resource management.

An equally big benefit for growers is that Athena’s reports come in a format easy to translate into regulatory compliance reports, easing growers’ regulatory burden.

Athena is building out the first commercial version of its application in Microsoft Azure and will incorporate machine learning and AI functions. The first version is slated for release later in the year.

The firm’s revenue model is software as a service. Clients pay a subscription fee tied to total acreage of their grower network. Additional analytics are available on an additional fee per acre basis. The client’s growers access the platform for free, and for a small per acre fee they can access the compliance reporting feature.

Sypnieski and co-founder Bill Mitchel, a former Microsoft executive, are in fundraising mode. As part of this effort, Athena applied to and was selected into the 2018 Village Capital Food and Agriculture: US 2018 investment-readiness program.

One of the workshops will be in Davis from July 17-20. If you are interested in attending the Davis workshop, the contact is alex.arrivillaga@vilcap.com.

We look forward to following Athena Intelligence on their startup and innovation journey and wish them the best of luck.

Please stay tuned for more Innovator Spotlight posts where we will highlight the innovators and change makers in the sustainable food and ag innovation space. If you know of someone we should be covering, please email us at viniocommunity@gmail.com.

About the author: Leanna Sweha is an attorney with an agtech background who has worked for the California Legislature, the California Resources Agency, and the UC Davis Office of Research.  She is passionate about promoting new sustainable agriculture companies. www.linkedin.com/in/leannamsweha